And I whispered to the horse

Once In A Blue Moon 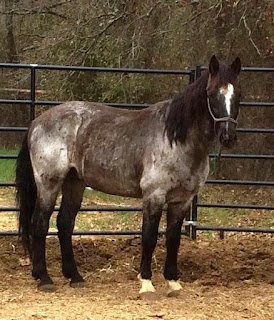 River is an 8-year-old blue roan branded Mustang gelding captured as a 3-year-old from Jackie's Butte Herd Management Area in 2012.

He was adopted by a woman who could not handle him, said he was too much horse for her, subsequently he was returned to the holding facility.

He was adopted a second time by someone who saw the beauty on the outside but had no way of knowing what lay beneath this handsome exterior.

He was sent to training, he was to be a saddle horse and be this adopters pride and joy. He learned to accept a halter and a saddle, he learned how to live within fences and pace corrals, that's what he'd endured after his intial capture so that part was easy for him, although worrisome for this once wild creature. The first trainer didn't get much more accomplished, so he went to a second trainer who didn't fair any better with a horse that wasn't interested in human companionship.

While he was waiting to be off-loaded to a quarantine area it was very clear he did not like the trainer that brought him nor the owner that decided to do the right thing by him. It was quite obvious to me that sometime after capture he endured a situation or set of circumstances that would make him the defensive bully he had become. It may have been his handling during and after capture, maybe the first adoptive home was abusive and by the time he arrived at his second home and to a set of trainers that had no idea how to gentle a wild horse, the damage had been done.

No matter, he now has a herdlet to run with, two close herdmates that accept him for what he is and a life of few demands. He is not accepting of human touch and is fearful of humans in general, but he is home and will always be safe.